Continuous Testing is a joint term of another two popular terms in software development: Continuous Integration and Automated Testing. Unfortunately, despite of being talked a lot, many software professional have fuzzy views of CI and test automations, rarely see them in action with good outcome. For example, we commonly heard: “We have a test automation team, but we don’t what they do, our testing is performed by manual testers”, “Our CI server does build and deployment only, no, it does not run tests. Some unit tests were run before, but hard to get all pass, it is mostly broken now and no one cares”.

If you are interested in why, click the links to view the excerpt of the upcoming book Continuous Web App and API Testing.

Test Automation is the foundation of Agile, with which few will argue. Many architects/test managers/software engineers in test talk about test automation constantly. However, few people have ever seen real UI test automation. Try answering these questions:

These are simple questions, yet very few can answer them well. The reason is simple: UI test automation is extremely hard. Don’t just take my word for it, let’s see what renowned experts say:

Real UI test automation is that software teams run full regression automated tests many times a day. If they all pass, software is ready to ship to production. Some might find it hard to believe that all AgileWay’s web applications are developed and maintained this way, see the case study of ClinicWise below.

Ever since Martin Fowler published the famous “Continuous Integration” article in 2006, CI has been one of most talked topic in software world. Aligning with Marin’s definition of a CI process: “fully automated and reproducible build, including testing, that runs many times a day”, I believe a typical CI build will perform the following core tasks:

We can find the use of Continuous Integration servers (such as Jenkins, Bamboo, TeamCity, …) in many so-called ‘agile’ projects. However, most software teams have never reached Step 3. Functional testing is mostly the same: test manually. Without automated regression tests, the whole CI promise (release high quality software faster) falls short. Ironically, the first sentence of the original CI article is: “Software development is full of best practices which are often talked about but seem to be rarely done”, 12 years later, despite of the high hype, it is still largely true.

There are mainly two technical reasons that have contributed to this situation: 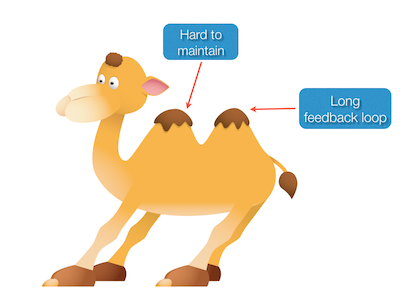 Why traditional CI servers not fit for running UI tests?

The test execution features in traditional CI servers are for unit testing, which is quite different from UI test execution. Comparing to unit tests, UI tests are

Besides, it often requires a team effort to detect UI test failures from a build,. Firstly, testers need to find the repeating steps and verify them, then communicate with programmers, business analysts (for clarification) or even the manager. With more tests added to the automated regression test suite, testers will find the effort of maintaining the test suite grows exponentially if the process is not super efficient,.

In summary, executing UI tests in CI is difficult, and much more challenging than expected. This is why we see failed attempts everywhere. For example, so called ‘DevOps architects’ managed to get a task configured to run a batch Ui tests. With the nondeterministic number of failures growing every day, they eventually gave up.

Some might have doubts: Is this Agile? How could we be fast if we have to stop to address defects from testing? Please refer to the “Toyota Factory story” in the classic Agile book Extreme Programming Explained from Kent Beck: the father of Agile and the first author of Agile Manifesto. If there are still doubts for the real meaning of CI, please refer to Martin Fowler’s original “Continuous Integration” paper. As a matter of fact, if you step out of he current bad practices of Agile, CI or DevOps, you will see it quite obvious and clear: without end-to-end comprehensive testing, you will pay big price for buggy releases; without the foundation (quality through test automation), Agile simply is not possbile.

Still not convinced? Have a look at How Facebook does CI?, a great presentation by Facebook engineer at F8 conference. Facebook “top engineers” built the SandCastle CI infrastructure to ensure ‘Facebook is released twice a day’(and keeping up this pace is at the heart of Facebook culture). Obviously, you can get Sandcastle, even Facebook makes Sandcastle publicly available, which is extremely unlikely, it will be too complex for most software teams. Luckily, we have BuildWise.

Set up and run Selenium Tests in BuildWise in 3 mins

For many of us, running UI tests in a server is a new concept. The below video shows that it can be done in around 3 minutes.

ClinicWise is a modern web-based clinic management system. It is developed solely by me in my spare time (initially for my brother’s dental clinic, later became commercially available). The Continuous Testing process with BuildWise has made the development of this high quality and extreme high efficiency application possible.

You may check the clone of our Build server at http://buildwise.itest2.com.

The testing process prevents many many critical defects, quite some could have ended the project if not detected.

The number of automated UI tests increases gradually along with the development. Experienced test automation engineers will understand this is not just a simple increment. With every new features (or change request) implemented, besides developing new tests, all previous tests need to pass as well ( i.e. regression).

This below chart shows test executions over 4.5 years (near 1900 builds).

Another message from the chart is the approach is scalable. With the number of test grows, the chance of getting a green build remains relatively stable.